Time to tell the truth, my opponent says let's set the record straight, so let's do that.

At the debate on Monday night, Danny Tarkanian made it very clear that he had no intention of running for office when he moved to Douglas County in 2019, and in fact, he was only encouraged to do so in March of 2020 by about 3 people! Does this hold water? I think not. Notice the above document, Danny first moved to Ruhenstroth when he came to Douglas County in about August of 2019. He then lived in Commissioner District #3, Note that the above document says Douglas County Commissioner District #3.

Danny moved, closed escrow in Late January and that moved him from District #3 to District #1, where he filed to run early in March.

So, do you think he lied about not intending to run for political office when he moved to Douglas County? The documents are true, these were directly from the NFAA website.

If he will lie about something this simple, you can not trust him to tell you the truth about anything. 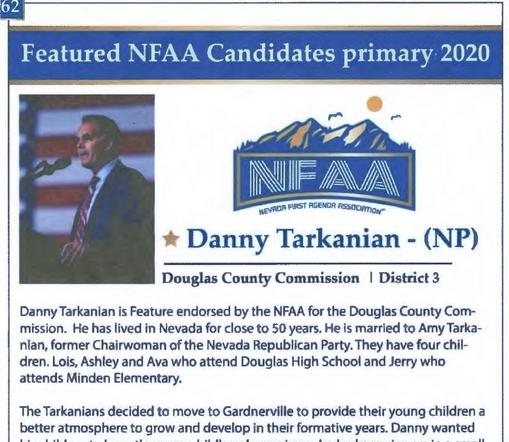 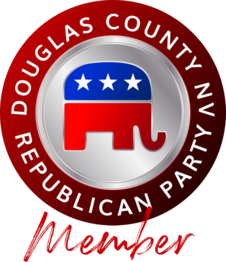 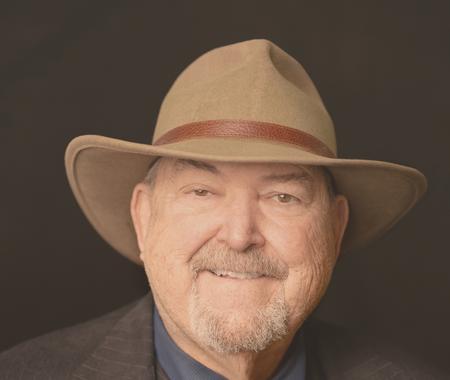 As you may have seen, Danny Tarkanian made the outlandish statement that I was a Democrat before moving to Douglas County Nevada. I cleared that up at the Biz Councils/Record-Courier Debate. I have been a conservative since I campaigned for Barry Goldwater in 1963. Back then you had to be 21 to Register and Vote, so all I could do was campaign for Mr. Goldwater. I did register as a Democrat for awhile in college for a very short period of time to vote against John Tunney in the primary who was a Democrat US Senator from California in those days. I re-registered shortly after the primary and have been either a Libertarian or Republican from there on out.

Mr. Tarkanian did apologize at the break at the Monday night event and told me he would print a retraction. I haven't seen it yet, let's hope he doesn' tell more lies, I am waiting patiently for the retraction.

Just a few things you should ask me and my opponent.

Second I have never taken a large salary from a 501C3 Charity. While I did help the Kiwanis Club of Carson Valley file for a 501C3 Status as a charity and was their bookkeeper for a few years never took a salary.

I have always been good with money and finances and never claimed bankruptcy. I think the citizens of Douglas County should really consider this a plus, after all you are trusting the commissioners to take care of YOUR money.

RDA#2 and the Corona Virus

Three Douglas County commissioners, Penzel, Walsh, and Rice, are likely to spend $34.25 million on a non-essential ill-conceived casino event center at their meeting on 4/16/20 that the casinos can and should build for themselves.

Is it financially prudent for the Douglas County taxpayers to pay for an event center for the casinos?

Douglas County citizens just received certification to put on the November general election ballot to approve or disapprove the Redevelopment Area 2 (RDA2), which provides funding for the event center.

Is it financially prudent for three commissioners to commit $34.25 million on RDA2 before the citizens will have the opportunity to vote on the RDA2 Referendum?

Governor Sisolak and Douglas County Manager Patrick Cates are sounding the alarm about deep long- term budget deficits due to the coronavirus-caused shutdown of businesses and our county’s heavy reliance on the tourism and hospitality industries.

Is it financially prudent to irreversibly commit $34.25 million on an event center before the County and State can determine which cost-cutting measures will be needed to get through these hard times?

The federal government is in the process of deciding if coronavirus relief legislation should be granted to the hospitality and casino industries.

Is it financially prudent for Douglas County taxpayers to give away $34.25 million, not actually collateralized by an event center (so it may never be built), and that is already being justified as possible emergency relief for the casinos?

The U.S. bond markets are vulnerable to collapse.  The federal government is guaranteeing existing corporate bonds that were healthy before coronavirus but have been severely downgraded.  The feds are also guaranteeing new up-to-24-month emergency municipal and city bonds for large cities and counties.

Our proposed bond will not be guaranteed by the feds, and, therefore, there is no market for this bond.  It is supposed to be in demand because it is based on a flood of visitors that supposedly will provide visitor-based hotel and property taxes for a debt-financed event center. The bond markets are not interested in dense get-together venues right now.  They are downgrading current existing hotel and convention center bonds.  Our proposed new bond is further threatened by a public vote of referendum disapproval which should make it very difficult to sell in May 2020, as planned.

Is it financially prudent to overestimate the non-existent interest of bond rating agencies and bond markets to a new bond offering for an event center in Stateline, Nevada?


The (South Lake Tahoe) South Shore Community Revitalization Project envisions a loop road and roundabout around the casinos in TRPA’s Main Street Management Plan, but the funding and approval of these plans are years away. These plans include Douglas County’s take-over of ownership and consequently cost of maintenance of US Hwy 50 through the casino corridor.

Is it financially prudent for Douglas County to commit $34.25 million for an event center before the new Main Street Management transportation system is approved and funded?

Douglas County is obligated to build within 7 years, 2 lanes of Muller Parkway through Park Ranch Holdings LLC’s agricultural land in Minden.  This road is expected to cost $12 million, and the County did not have any money to build this road before the coronavirus shutdown.  After the shutdown, there is even less money, and the County is in dire financial straits.

Is it financially prudent to commit $34.25 million for an event center, or is it sheer lunacy to lock up $34.25 million for 26 years in a County that will almost certainly be struggling to pay its bills and slashing services for years and certainly will have difficulty to build Muller Parkway in 7 years thanks to the coronavirus shutdown?